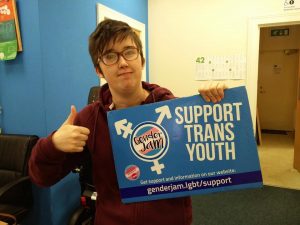 You’re gonna kill me for this, but…” is something I’ve become used to hearing in the first sentence of a phone call at 2am. Whether someone was in a pickle (read: needed a chat and KFC gravy) or was too excited to sleep (read: was even gayer than usual), those phone calls became a regular feature of my life.

Lyra McKee was to blame for these phone calls.

I first met Lyra at a pub lunch beside Queen’s University Belfast in 2011. Although surrounded by different types of nerds than her own niche, she was intensely interested in everything, and we briefly got chatting. I was intensely intimidated by her. For such a tiny woman, she could be extremely impressive, sometimes when she least expected herself to be. I can’t describe in words the facial expression she held when she was truly interested in what you had to say, which is odd because I was lucky to see that expression so many times.

Lyra was the first out gay woman I ever knowingly met, and coming up to my own coming-out myself, chatting to her about this was liberating beyond measure. Something about the way she knew herself was so empowering to observe. Lyra was the second person I came out as trans to, and the first person I told my new name to, and as a result was the inspiration behind my online handle, ellenfromnowon. I never told her that.

A regular outcome of those 2am phone calls was long drives in the mountains, to nowhere in particular. Lyra and I both seemed to think most clearly when we were travelling, and indeed the best and most cherished conversations we had were in my old red Nissan Micra (which she called The Beast), several hundred feet above Belfast on winding, dangerous roads. We were both deeply unhappy about some things in our own lives and deeply happy about others, and we talked about both. She would lament about unrequited love in one breath and in the next would rave about work travel she was excited about. We explored the depths of our hearts, and we cried with and we cried for each other. We worked through our fallings-out with ourselves and with others, and she taught me how to be patient, diplomatic, mischievous. She covered my diesel money as she had a bit more than I had.

We said we loved each other on the A57.

A blessing that many of Lyra’s friends got to witness was her discovery of true happiness over the past few years. From crowdfunding her first book to her mounting journalism profile, she had found what she loved and what she was great at. I never did work out how she did what she did – I could bring her to a random location on the 3rd, and by the 23rd she’d have something profound worked out about events that happened decades ago in that spot. Her mind was magical.

Lyra’s enthusiasm rubbed off on me easily. From giving me the confidence to d

o things I was scared to do, to regularly communicating her pride when those things happened, she was a torchlight of courage. She was talented at getting people to believe in themselves. I owe where I am today in significant part to her.

We’d watched each other grow happy in ways that we shared, and in ways that were our own. She giggled with glee when I smiled shyly about my partner, and beamed with pride when I made progress in my work. She stood steadfast when her friends were being attacked.

Lyra’s happiness also stemmed from being head-over-heels in love, something we excitingly discussed at our usual coffee shop visits. Her partner Sara lit her heart on fire, and I’d never seen Lyra as happy as she was when she first described her. From our lamentations atop the local mountain in years prior, to her overwhelming love for her girlfriend then, it was so great to see her growing into such a hopeful place. She had found her passion, her intended life partner, and a new home in beautiful Derry. 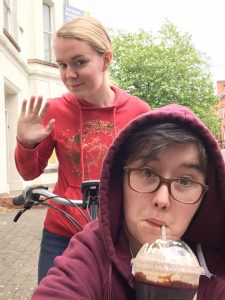 After deciding to take Thursday evening offline to end a tiring week, I woke up on Friday morning to what I thought was a joke tweet about Lyra getting shot. After all, she regularly joked that one day she was gonna end up getting shot for her work. The realisation that it was not that joke was slow and horrific.

I haven’t cried as much as I have in the past 48 hours. I’ve not even begun to process that she’s gone. At her vigil, I was expecting her to turn up anytime – it’s exactly the kind of thing she’d make sure to get down to. I am heartbroken.

Lyra McKee was to blame for these phone calls. She was. Changing to the past tense is devastating.

Lyra, you deserved so much more than this. I wish I had told you I was proud of you more often, and told you that I loved you more often. I can’t get the stain of your milkshake out of my car seat from when you spilled it everywhere. I’m so glad we got so close. I can’t believe my sweet friend has been murdered in the street. I wish you were here. This is so awful. I loved you. I love you. I love you.